Trudging through the wastes...Wasteland Essentials I - This Is Not A Test release!

Wasteland Essentials I - This Is Not A Test

If you are new to This Is Not A Test, you can read more about my thoughts on the game system, my experiences playing, and running demos. Today I am going to take a look at the upcoming release of Wasteland Essential I ($4.99) supplement from World's End Publishing. This is a complete scenario release with a complete set of paper miniatures to support the scenario (or general game play).

Travel through the wasteland is already a deadly prospect, but to do it with a caravan of slow moving beasts of burden is near madness. In this scenario, such a caravan has met an untimely end with the exception of the caravan animals. The mission is simple, retrieve the caravan. The danger is high since whatever wiped out the caravan is still in the area and no valuables go without competition. So get at it, grab what you can, and get out before the getting's gone.

This release is a 13 page pdf document that comes as full color. I printed out the entire package with 67 pound paper to provide the enclosed miniatures with enough support to hold up. The bonus is that the scenario is also very study now and with some sheet protectors will be good to go for a very long time.

The release comes with eight Irradiator Zombies, 27 Rad Zombies, six Caravanners, four Cargo Animals and bases for each. That is a total of 45 miniatures for the encounter. There are markers for three Zombie Nests, two Poisonous Gas, two Ripwinds, two Animal Colonies, four Dormant Ordnance, six Radiation Zones, and two Ember Quakes. This is sufficient to account for the possibilities built into the mechanics of the scenario.

A step-by-step set of instructions to cut and assemble the miniatures is included, as well as a list of materials necessary to be successful. Now, let's take a closer look at the process and build some miniatures. It's arts and crafts time, wasteland style.


Start of course by cutting out the miniatures, which is pretty easy with a pair of scissors. If you need help, grab one of your school aged kids to help out. One thing that I will definitely recommend is to use suitable paper stock. If you try to go on the cheap with this, you will end up with a miniature that either won't stand or that you will need to replace frequently. Also make sure you have a decent pair of scissors, there is a lot of cutting and quality scissors can really make a difference.

So once you have cut out the miniatures and bases, you need to start assembly. The miniature is pretty simple, you just need to fold in half at the red line and flatten out. I used the edge of my scissors to flatten, but a straight edge is also fine. Use some caution if rubbing back and forth as you may scratch off the ink or tear the paper. For the base, I definitely recommend using some sort of straight edge for the folds for the uprights (where the miniature attaches to the base). These are pretty small flaps and can be a little harder to grab.

I have assembled the miniatures with glue and with tape and both are suitable. The glue stick will give you a more solid miniature for play, but in a pinch go ahead. I do recommend that you have two glue sticks, there are a bunch of miniatures to assemble and you may want to snack on one. Glue the miniature front and back together and apply a little pressure to ensure the glue bonds. For the base assembly, I found that applying the glue to the bottom part of the base and the bottom of the miniature allow you to fold the base halves and add the miniature to the base all in one step.

With everything assembled, use your scissors to trip the edges from the base so you have a nice circular base. The miniatures (zombies and caravanners) go on 28mm bases and the beasts go on 40mm bases. With this assembly, you are all ready to start your savaging, happy hunting. 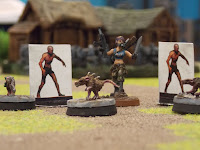 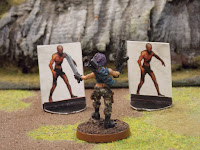 In a recent game with Joey (Caravanner Raids), I spent a little time at the end to capture some images of paper miniatures with the figures we were using in the game. At the time of these photos I only had two Rad Zombies completed and all of the photos will be using those as the cooperators.

These Rad Zombies have been compared with Joey's Gas Mask Girl and a couple of members of the Rat Pack.  The other set of comparisons are with some of the Reaper Bones NOVA Corp figures based on the Teconic Studios Base Crowns that I am using as peacekeepers and will be using in the future for the S.E.n.T.R.I protection force in an upcoming Marvel Superheros campaign. 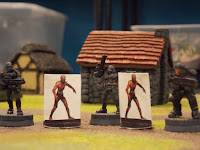 These paper miniatures are appropriately scaled even when compared with the based miniatures. The printed look of the miniatures is of excellent quality and detail, though much of that will depend on your printing capabilities. The recommendation (that I got to provide for the supplement) for 61 pound paper is good, though if you really want very long-term use of the miniatures than you will want a heavier card stock for printing.
Posted by Unknown at 7:00 AM

Promote Your Page Too